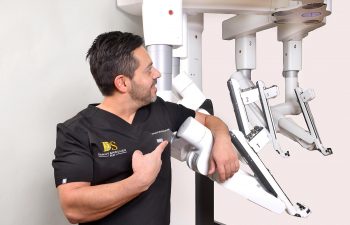 Often people are scared when they hear the word robot. In science fiction, robots are often depicted as the enemy of humanity and when it comes to surgery, it’s understandable that people have concerns. However, in reality, robotic surgery has several benefits over traditional surgery and a human surgeon is always in control.

What is Robotic Surgery?

Robotic surgery is minimally invasive, or laparoscopic (small incision) surgery. A highly trained surgeon controls the robot from a terminal. The robot has a high-definition three-dimensional camera, allowing the surgeon to see in far greater detail than the human eye can alone. Robotic surgical systems allow for superior visualization, enhanced dexterity and improved control. Robotic arms can rotate a full 360 degrees, something a human arm could never do, and a robotic arm is much more precise than a human hand. Think of robotic surgery as a very precise tool, rather than a robot with a mind of its own.

The Benefits of Robotic Surgery for The Patient

Smaller and fewer incisions are required with minimally invasive robotic surgery; often the incisions are less than 1cm in length. Because of this, there is also less scarring, less blood loss, faster healing and less risk of infection. Sometimes skin incisions are not required at all.

Patients can benefit from faster recovery, fewer complications and reduced post-surgery pain due to less internal trauma and more precise movements. This means that patients have shorter stays in the hospital and can return to their daily lives much quicker.

Robotic surgery also allows for operations that would otherwise be impossible, complex surgical procedures that are not possible without the assistance of precise robotic technology.

The Benefits of Robotic Surgery for the Surgeon

The surgeon benefits from greater visualization. At the console, the surgeon has a superior view of the operating area. The high-definition, three-dimensional camera provides a detailed and magnified view, allowing the surgeon to see microscopic structures clearly.

A human hand can perform many actions, but when it comes to surgery, a robotic instrument exceeds the range of motion and dexterity of a human hand. A robotic arm can rotate a full 360 degrees, allowing the surgeon to operate in a way that would otherwise be impossible.

Dr. Danny Shouhed is a leader in the field of robotic surgery and is the director of the Robotic Catalyst Program at Cedar Sinai Hospital.

Dr. Shouhed is also a proctor for Intuitive Surgical, a leader in robotic-assisted surgical equipment, and travels to other parts of the country to train other surgeons in robotic surgery.

If you are interested in having a robotic procedure performed by a reputable surgeon, then contact our office in Los Angeles to schedule your consultation. Find out if robotic surgery is the best option for you.